From Privilege to Orphanage - 4word

Making plans for our lives is a natural practice that we all take part in. From vacations to education to careers, we are constantly picking paths to take ourselves down. For Brittany Merrill Underwood, founder of Akola Project, the path she had thought she was going down took an abrupt u-turn when she met a Ugandan woman named Sarah, and Brittany’s journey ever since has been one of revitalization and hope for Uganda.

4word: Tell us how a college girl from Texas ended up in Uganda.

Brittany: I had plans to travel through Europe the summer after my sophomore year, but my friends convinced me to tag along teaching English in Uganda instead. I had no intentions of going to Africa or serving people that summer, but the Lord had other plans. To be honest, it was a challenging experience. This was my first time experiencing poverty, and it overwhelmed me. I was completely out of my element, and I really struggled to feel comfortable. A local pastor noticed my discomfort and took me to meet a Ugandan women named Sarah. That meeting changed the trajectory of my entire life.

4word: What was your first interaction with and impression of Ugandan women?

Brittany: Sarah was a few years older than me and grew up as an orphan, yet lived her life with 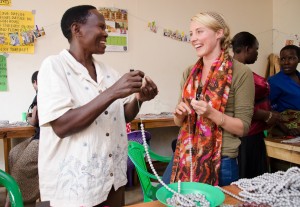 great meaning and purpose as she sacrificed everything she had to open her doors to 24 street children who slept on her floor. Sarah explained there were times the children went without food, but she was proud that not a single child died of starvation since they wandered into her home. Sarah told me she had full confidence that God would provide for the children even though she was poor herself and did not have the means.

4word: Your first step toward helping the people of Uganda was to build an orphanage. Tell us about that project.

Brittany: At first, it was a burden. It was strange that I only spent ten minutes with Sarah yet I remained so deeply affected by her story. I decided to return to Uganda to help build a small house for Sarah’s 24 children. The “small house” quickly turned into a one million dollar vision to build a three-story orphanage to house 200 children in the area. I had never raised $100 before, much less one million dollars that I needed to complete the project. So I flew to Uganda, filmed 9 hours of footage, and created a fundraising video. As I edited hours and hours of stories from the children that slept on Sarah’s floor, what was once a burden became compassion and then a passion.

After starting a 501(c)(3) organization in the halls of SMU’s non-profit department, I moved to Uganda to see the orphanage built to completion in 2006. It was the most difficult and glorious season of my life. I watched as the orphanage grew in size from a foundation to a painted building. Some days, the orphans would miss school to help us paint or build a fence. They knew how important the building was for their livelihoods. The building was completed in 2009 and was featured nationally and internationally on CNN.

4word: How did you transition from opening an orphanage to starting the Akola Project?

Brittany: At the same that we were overseeing the construction of the orphanage, we were drilling over 20 wells in communities that lacked access to clean water. As we traveled to different villages throughout the country, we were amazed by Ugandan women who cared for 10 + children in their homes. Like Sarah, they had a vision and hope for their families — they simply did not have the income to embrace their calling. 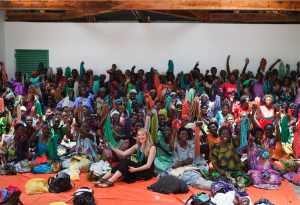 We discovered that by training and employing 250 women and guaranteeing them a monthly income we could care for 2,500 children without building an orphanage. It was a way to make a greater impact. A model that was sustainable. It was a pathway to care for more orphaned children. It was a means to help other women facilitate their dreams. In 2007, as we were getting ready to grant the orphanage to Sarah’s local ministry and sponsorship organization, we launched a new sustainable model to uplift women and children. The women named it, “Akola” which means ‘to work’ in their local dialect.

In 2010, I moved back from Uganda to the U.S. to get my masters degree in Intercultural Studies with an emphasis in International Development. After five years in the field, I worked with the best development practitioners in the country to develop a sustainable impact model for women. The work paid off. Over the last seven years, the Akola Project has blossomed into a thriving social-business that has empowered 250 women to transform the lives of 2,500 disadvantaged children in their communities.

4word: How has the Akola Project impacted the lives of Ugandan women? 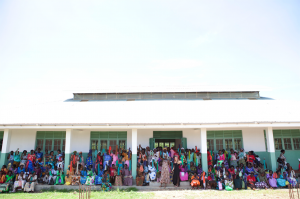 Brittany: Akola currently works with 250 women across five rural villages in Uganda. Our impact model starts with community infrastructure for economic opportunity including 23 water wells drilled, two vocational centers constructed, and roads built. Akola then provides vocational training for these women who have had no education or vocational opportunities. Because we work with such marginalized women, our training patiently starts with basic arithmetic but culminates to leadership development as they progress in their roles.

Akola is a dependable source of income for these women who are traditionally subsistence farmers. Akola does not work with artisans, buying product. We allow the women to earn monthly salaries that allows them to pay for school fees, medical needs, shelter, and food. Because this is the first time our women are earning capital, we prioritize teaching them to save and loan to one another 10-30% of their Akola income. Finally, the last tier in our model is sustainability. We’ve seen 63 women use their Akola saved income to launch local businesses that generate wealth for their families for generations to come.

4word: You recently decided to bring the model behind the Akola Project to the U.S. and open a flagship store. What does this new chapter in the Akola Project’s journey mean for women in America?

Brittany: We are joining a holistic effort to rehabilitate women in our city by offering an economic alternative to women who have been trafficked, an issue prevalent in Dallas and dear to our hearts. We now train and employ these women in confidence-building, marketable skills, so they can succeed in the mainstream workplace. We originally launched with an internship program three months ago, but we are thrilled to announce that we’re able to offer full-time employment for the interns we are currently working with beginning in December! One of our interns had not worked in 17 years and started the internship feeling the weight of insecurities. It’s been a joy to watch her gain dignity and self-value as she learns she is capable. She now works independently on several projects and learns new skills daily! You can get a sneak peek at the store in the video below.

4word: How can 4word women support the Akola Project and its movement both in Uganda and America? 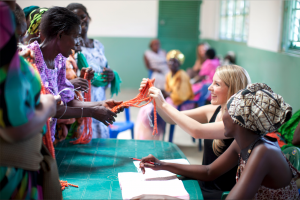 Brittany: Purchasing Akola products and spread the word! Our Akola customers play an important role in the mission and work we do, and we encourage you to wear your pieces proudly as you advocate for the women who are being transformed globally. We’ve partnered with 4word to feature our Purchase with Purpose items in your recently launched online store. I’m so excited for 4word women to have this opportunity to purchase Akola products that will make an impact in the lives of Uganda’s women, as well as support 4word and their mission to make a difference in the lives of professional Christian women!

4word: What’s next for the Akola Project? Any upcoming products or events that you can give us a sneak peek of?

Brittany: We are launching our brand through a prominent national department store this coming Spring and are adding 100 new women to our program this upcoming year. It’s an exciting time for Akola!

Have you had any u-turns in your life? How did you adjust for them?

Brittany Merrill Underwood has made an extraordinary impact by transforming the lives of impoverished women and children. While at Southern Methodist University, she spent the summer of 2004 in Uganda and was moved by the dedication of local women who sought to transform their communities. In 2006, Underwood moved to Uganda to partner with a Ugandan ministry to build a three-story orphanage with the capacity to house 180 street children. In 2007, Brittany launched the Akola Project, a social business within a non-profit framework to improve the well-being of marginalized women, their families and communities. By offering training and a dependable income for women, the Akola Project has elevated over 2,700 Ugandan women and children out of extreme poverty. Locally made, fashionable accessories made by the women of the Akola Project have been sold in over 350 boutiques throughout the United States and will launch through Dillard’s department stores in 2015. Akola Project recently expanded to the US to provide an economic alternative to sexually trafficked women in Dallas. The project has been featured on Entrepreneur, Fox Small Business, CNN, and the Today Show.

Brittany was awarded the distinguished Emerging Leader Award from SMU in 2013 and has been honored by clothing manufacturer Levi’s as one of 50 women around the globe who have changed the political, cultural, and spiritual shape of the future. In 2014, she won the Young Leader Award from the Dallas Women’s Foundation and was asked to join the elite mentor class for the Laura Bush Women’s Initiative. Brittany has been featured on the likes of The Katie Couric Show, CNN’s Young People who Rock, Modern Luxury and Huffington Post. Underwood completed a Master’s Degree in Intercultural Studies from Fuller Theological Seminary in 2013 and continues to devote herself to improving the lives of women and children as the Founder and President of the Akola Project.