Sponsor registration and ticket sales for the 2020 4word Gala: An Evening With Laura Bush close on Feb. 5!
Purchase Tickets Now

Erin Burchik and her husband, Brian, have spent their entire marriage seeking out ways to impact the lives of those less fortunate in their community. After adopting their daughter in a miraculous turn of events and recently adopting three more precious foster children into their family, Erin became burdened for children in similar circumstances overseas.

Find out how she’s using two children’s books to help these international children, and how you can help support her mission this Christmas season.

4word: Tell our readers a little about you and your family! 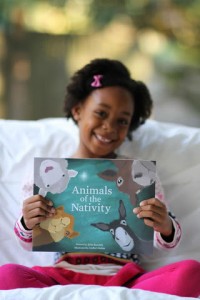 Erin: My husband, Brian, and I met while we were in school at the University of Georgia. After we got married, we intentionally moved into our first apartment where refugees were resettled. This is something that deeply shaped me in my "fresh out of college" years. Not long after we were married, Brian and I both were on staff at our church. And it was because we were so connected at our church, Grace-Snellville, that we were approached by a woman who asked us to bring her granddaughter into our home in an unconventional fostering situation. We went on to adopt that precious girl about a year and a half later, and we just finalized the adoption of our three youngest children last week! We adore our four kids and count them as the greatest blessings in our life!

4word: You are incredibly passioned and burdened for children in the foster care system. What influenced this interest?

Erin: In college, I worked at a "foster-to-adopt" agency, so I got to work with several families who were adopting children out of foster care. I was inspired by these kids who were so brave and resilient. But more than anything, our faith in Jesus is what led us to get involved. Psalm 68: 5-6 says that God is "a father to the fatherless...God sets the lonely in families." We truly believe God is at work in the lives of children in foster care, and we knew He was inviting us to join Him in that work. We also knew that as a country, we are in the midst of a foster care crisis. In our county, there are not enough foster homes, and they've actually had to place some kids in extended-stay hotels with babysitters. This reality just devastated us. We are so thankful to be a part of a church who supports foster families and kids.

4word: How did each of your children enter your lives? Has welcoming each one into your family been easy or were there any "hiccups" along the way?

Erin: After we finalized our oldest daughter's adoption just over four years ago, we almost immediately felt called to continue to grow our family through adoption again. We did some research and spoke with other adoptive families, and then we selected a large stable agency and began the process of adopting a sibling group from Ethiopia. About a year and a half later, we were waiting any day for the phone call that would let us know it was time to travel.

However, one day we received an unexpected email from our agency. I opened it and saw that our agency had gone bankrupt. We were notified that we had lost everything - a year and half of time, countless hours of work, and our entire life savings of about $27,000. We took a few months to mourn that loss, did some research, and found a more secure way of doing international adoptions. We found a way to be matched with children up front with large agencies so we could minimize the risk. However, we had already lost all of our savings and you can imagine that my husband and I did not go into ministry for the paycheck. 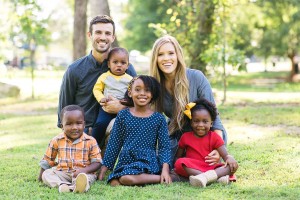 This time, we leaned on the support of our community to raise the money needed. We were immediately matched with three little girls from the Democratic Republic of Congo and we could hardly wait to get them home! We could not wait to become a family of six. However, about one year into that process, we received an eerily similar email and, because of country complications, that agency had also gone bankrupt. This loss was almost too much to bear. We had three little faces we were waiting on, and so much of the money we lost came from the generosity of our community. Now we had lost almost three years of time and well over $50,000.

I had to go to a bankruptcy hearing for that agency, and while I was there, I was asked to speak to a group of lawyers about what I had been through in that year. All of a sudden, both our adoption losses became so overwhelming that I began to weep during my statements, so much so that the lawyer had to stop me and say, "Ma'am, we want to understand what you're saying but right now we just can't..." I sat back down after I sobbed my way through, and the woman behind me slipped me a business card from a man who had just started a child-placing agency in our area. I had a feeling this was the reason I went that day.

About a month later, I received an email from someone asking to hear about church involvement in foster care. It was at that meeting that this man's story began to sound familiar, and I pulled out the business card to discover it was the same person! It was Wayne Naugle of Uniting Hope 4 Children (UH4C.org). I told him our story and he asked, "What is the ideal scenario for your family?" I told him, "We'd love to bring in three children under the age of five into our home."

Three days later, we got a call from Wayne about a 3-year-old girl, a 2-year-old boy, and an 18-month-old boy in need of a home. On the day before Thanksgiving 2014, we welcomed them into our home, fostered them for a full year, and on the day before Thanksgiving 2015, we officially adopted them! We are so thankful for each of them and for our "forever family" of six!

4word: Last Christmas, you embarked on a mission to impact children outside of the US, too! Tell us about "Animals of the Nativity," why you wrote it, and the inspiring mission behind it.

Erin: A few years ago, I asked myself, "How can we change the Christmas conversation with our kids?" I desperately wanted to have meaningful conversations with my daughter at Christmas time, but it seemed like everything was so focused on getting presents. I wanted to talk with her about the hope, joy, peace, and love that Jesus came to give us, but at the time she would not have been very interested in that conversation.

I began to think of an engaging way to have these conversations, and this led me to start writing a children's book about the story of the first Christmas through the eyes of the animals who might have been around Jesus at His birth. I wrote four poems about a camel, donkey, sheep and cow to focus on the four themes of advent - hope, joy, peace, and love.

After I finished writing Animals of the Nativity, I knew I wanted this to be all about celebrating Jesus' birthday. And what do you do when you celebrate someone's birthday? You give them a present!

But how can you give Jesus a present? He tells us in the book of Matthew:

“For I was hungry, and you fed me. I was thirsty, and you gave me a drink. I was a stranger, and you invited me into your home… Then these righteous ones will reply, ‘Lord, when did we ever see you hungry and feed you? Or thirsty and give you something to drink?’ And the King will say, ‘I tell you the truth, when you did it to one of the least of these my brothers and sisters, you were doing it to me!’” - Jesus (Matthew 25:35, 37, 40) 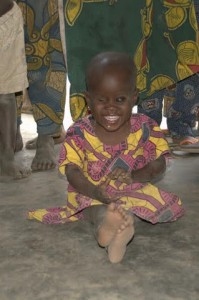 We made the decision to use the proceeds of this book to to feed children who are suffering from severe malnutrition in Benin, West Africa. We partnered with a fantastic non-profit called Aide La Vie which distributes a special kind of life-saving food to kids.

A great example is Liana. Last year she could not walk because of the effects of malnutrition. But because many people bought this book last Christmas, we were able to provide this special food for her and now she can walk! We'd be honored for you to order a copy at www.thejoymarket.com!

4word: "The Bear Hug," another of your books, focuses on teaching children about diversity and acceptance. What led you to write this book? 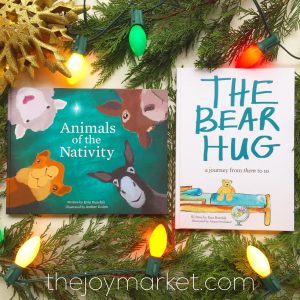 Erin: Because of my work with refugees, I became so aware of the "us and them" mindset so prevalent in our culture. After the little Syrian boy, Aylan, washed up on the shores of Turkey, I couldn't sleep that night. I was so burdened by the desperation of his parents and the Syrian people in general. I began writing this story about a little boy who goes on a journey in which he goes from viewing kids from other cultures as "them" to viewing children from all parts of the world as a part of "us." We tried to get this message across in a very kid-friendly way by focusing on different types of play all around the world! All of the money made from this book is going to the aid of Syrian kids and families. It is also available for sale on our website.

I'd love to keep in touch with you all! Please check out our website at www.thejoymarket.com, or stay in touch via Facebook at facebook.com/thejoymarketpublishing or @thejoymarket on Instagram!

Are you burdened for the children of the world in need of a loving home? If you are at a place where you are interested in adoption or fostering, seek out local assistance in your city to begin your journey. If you’d like to help Erin in her mission to enrich the lives of children in Syria and West Africa, be sure to purchase copies of her books. What better gift to give to the children and families on your Christmas list this year?

Erin Burchik is a wife and mom of four who is passionate about both her small town and many nations, social entrepreneurship, and foster care & adoption. Erin works at the Grace Family of Churches in the metro Atlanta area leading international and local outreach. Erin founded The Joy Market which brings joy to kids all over the world by connecting children's books to amazing causes. Erin earned her Master’s Degree in Social Work specializing in Marriage and Family Therapy from the University of Georgia.

Learn more and purchase tickets below!