Finding and building community among family, friends, and co-workers is one of the most time-consuming yet eternally rewarding tasks one can undertake. The relationship between siblings can be one of the truest forms of the idea of community. We spoke with sisters April Swaine and Jana Ventura about how their deep connection and friendship has affected their lives and enabled them to get to where they are today.

4word: The two of you share an incredibly strong connection, even for sisters. How does this connection manifest itself in the roles you play in each other's lives?

Jana: April keeps me accountable to the promises that I don't want to keep. She is the person I turn to when I'm feeling defeated. When I was five months into my internship in Hungary and was missing home more than ever, she told me that I was strong enough to stay. And I stayed, and she was right. She will always tell me what is true and though it may hurt, it has shaped me into a better woman.

April: I've struggled off and on about the complexities of being Jana’s older sister. I have many times enabled her which can be a positive and a negative. The fact that these past few years she has become my peer, more so than my ‘baby sister’, astounds me. It’s humbling to be called out, preached to, and inspired by someone you used to take care of. I have learned so much about forgiveness through Jana. When I was angry with my step-father over the disillusioned marriage with my mom, Jana was there to give me perspective. When Jana was angry with our mom over the same disillusioned marriage, I was there to remind her of the difficulties of being a mother and a wife. We both processed this time in our life negatively. We chose to fill gaps in our family life with substances, un-fulfilling relationships, and bad choices. We still deal with shame from those years to this day. But the miraculous happened. As we acted like orphans and victims – God was there will open arms to bring us back to his grace, and his love. Jana and I have a closer bond than we ever had and have forgiven our parents. Though family life is never perfect, we know our backbone, identity, strength, and purpose come from God – no one else.

4word: Now that you're both in your twenties, what steps have you taken to grow your friendship?

April and Jana: Sharing a bunk bed got us started, but as with any friendship, it takes quality time to foster and grow it. During Jana’s sophomore year in college, she would spend the night at April’s apartment at least once a week. Jana was drawn to the comfort of April’s home and delicious meals prepared from scratch.  April hired Jana as her Administrative Assistant, which really stretched our relationship to respect one another professionally while showing empathy 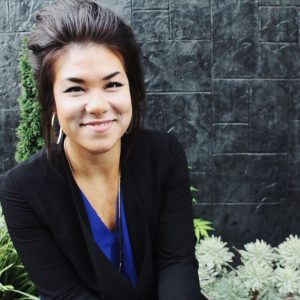 as family members.  Jana helped April be a better boss, manager, and sister through honest feedback.

By spending work and personal hours together, we learned to love each other on a deeper level. Jana got to know what was near and dear to April’s heart (her job) and serve her in that capacity. We have fond memories of these years doing everything from grocery shopping to working out together. April recalls bringing study snacks to Jana during her late night study sessions at the University of Washington Business School. We would often talk about our strong beliefs albeit political, social, relational, or faith related. Evenings consisted of taking turns reading aloud to one another after we read an article that claims it stimulates new brain cells! This growth is where we learned what inspires, brings joy, sadness, laughter to each other.

4word: What does community mean to you? How do you define healthy community and friendships?

April and Jana: Community to us is a support system. We imagine it being a pot that you both add to and take out of.  Community is honest, real, dirty, authentic, and it grows. It means having people in your life that you learn from, look up to, and are challenged by - but can also mentor and teach. An "iron sharpens iron" relationship is what we look for in our community. We believe that a group that shares the reassuring knowledge of God’s goodness but is not 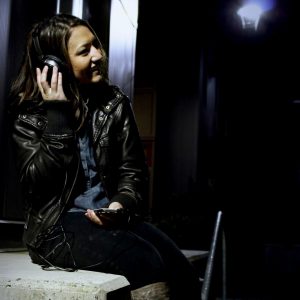 afraid to bring up their challenging questions of faith defines a healthy community. We try to surround ourselves with people who are much stronger and smarter in their faith than us. Jana believes that shared experiences can help unify a community. For example, in her small group in Hungary, they shared the experience of what it meant to be a Christian on mission in a foreign country. This shared "ex-pat" experience helped them learn and lean on one another, despite how different they all were. We think that in order for a community to be healthy there needs to be a diverse group of believers that are also united by a common belief, goal, or experience.

4word: On a day in and day out basis, what does (or should) community look like?

April and Jana: Community to April looks like phone calls, emails, notes, grabbing coffee, etc. It should feel like life. Not forced. We agree that community can be an informal or formal group of people that love and encourage one another. Jana is most confident in her faith and her life when she constantly meets with people that she knows are praying for and encouraging her. You should never be afraid to talk about the "hard life stuff" with your community, and we think this "suffering together" piece is what solidifies a community group in our hearts.

4word: You are both an integral part of the 4word: Seattle Local Group. Please tell us what finding 4word and seeing it take off in your hometown has meant to you.

April: Finding 4word was like a breath of fresh air. It was wonderful to meet women who spoke my language, who were passionate about their work/calling, understood my busy schedule, and wanted to encourage me. Being a 4word: Local Group Leader has brought so much joy into my life as I see God work in women's lives (and mine!).

Jana: 4word has been an opportunity for me be real, honest an unique among women who are extremely different from myself but united by our love for Christ and desire to see one another thrive. Our most recent "coffee hour" was the highlight of my week as I shared everything from my vision for the Seattle 4word chapter to the dreams that I have for my role at work. 4word is a chance to be refreshed, encouraged and energized in faith!

4word: What steps do you two take specifically to encourage each other?

April and Jana: April consistently asks Jana about her "heart". This helps April gauge where Jana is at emotionally. Then, we chat about life. We don’t sugar coat anything. If we are stressed, worried, anxious, excited, drained, grateful, etc – we communicate that to each other. We try to give as much feedback from our experiences as well as using our strengths as reminders that we can do anything we set our mind to. We work best when we take turns listening to each other, then go into prayer mode, then problem solving mode.

Jana smiles when she remembers how April encouraged her in countless ways when she moved 5,000 miles away from home. April didn't hesitate to take her entire years’ worth of vacation 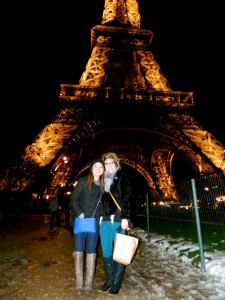 from work to show up at Jana’s doorstep in Budapest, Hungary. We took a trip to Paris together and spent the evenings talking through months of life over breaking bread. Not only did April visit, but she sent monthly care packages with all of the goodies that Jana was missing from the States.

April does this out of the generosity of her heart, for nothing in return. She has no idea how much it meant to Jana to receive April’s little card so far from home that would read "Passion Changes Everything." We also Skyped when Jana was abroad, and sent massive amounts of emails and photos back and forth. When Jana came home, April converted her loft into a bedroom for Jana "just to make sure I had a second home to rest my head." Most notably, April surprised Jana by putting together a scrapbook of pictures from her travels and a collection of dozens of emails that we had sent during her time abroad. This gift brought Jana to tears. Now that Jana is all settled, we meet weekly to have dinner or workout and talk.

4word: Any other thoughts about friendship and community?

April and Jana: Shared experiences, goals, and priorities help foster friendship and community for us. We like knowing the other person truly "gets" us and understands what we are dealing with. Conversely, it’s also exciting to explore each other’s differences to gain perspective on certain things. April inspires Jana and vice versa! We inspire each other in areas that the other is 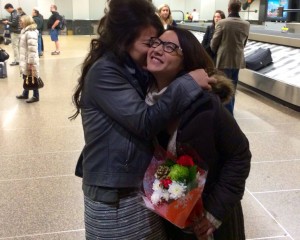 Although we are sisters and united by many shared experiences, we have grown to be two individuals that glean from one another. It is a fact that we would not be where we are today without seeing the other as a role model or a tour guide through life. Our goal is to continue to teach each other lessons about life, love, work, and faith with many laughs in between.

April and Jana’s story is an inspirational promise of what taking the time to invest in and grow someone else’s life can ultimately provide to both parties involved. Building community doesn’t have to be an intensely structured and regimented practice. Just be there for someone, become their shoulder to lean on and ear to speak to, and you just might find yourself building a lasting community relationship of your own.

4word women, do you crave the connectedness and nurturing of a community in your life? Then join the newly-launched 4word Membership Program! The program's affordable annual membership allows you to connect with an active group of professional female leaders across the nation desiring to use their collective skills to change the world for women. For more information on how to join and the exclusive benefits you'll receive (like access to the Job Connections Board), click here!

How have you built a community with those around you? Has your community contributed to your life’s journey in any way?

April Swaine currently supervises an Industrial Tech Company in Redmond, WA. She is passionate about her faith, cooking, and fitness. She enjoys spending time with her dog, blogging, uplifting women, and soy lattes. You will most likely find her reading a book in the bubble bath after a sunset run.

Jana Ventura currently works for Amazon as a Recruiter in Seattle, WA. She is passionate about her faith, traveling, and music. She enjoys photography, coffee shops, adventures, and a good book. You will most likely find her researching her next trip over a cup of joe listening to indie music.

Do NOT follow this link or you will be banned from the site!